Meow!  Hi, I’m Pumpkin, Rob’s orange cat.  I’m about 15 years old and my buddy Boo is a black kitty, who’s 16.  This is our side of the story of our current situation.

We’ve lived with Rob for almost our whole lives.  We’re pretty timid and don’t really like visitors much (I hide under the bed and Boo usually hisses at them).  We also aren’t all that fond of changes to our lifestyle and home.  Being over 15 makes us senior kitties and we’re pretty set in our ways.

How Our Motorhome Adventure Began

That brings me to the beginning of this adventure. We were pretty cozy in our home in Alberta.  After moving with Rob into Dar’s house 2 years ago, we had just finally trained her to let us stay upstairs full time and sleep on the bed.  We were sooooooo tired of the basement.  Dar and Rob started acting all weird and many of the things we were used to climbing on around the house were disappearing and more and more boxes appeared daily.   Strangers would came and walk around the house – we didn’t like that one bit!   We knew something was going on.

My Secret Hiding Spots Were All Gone

Then one day the house was almost empty and even my hiding spot under the bed was gone and the bed was part of the floor now.  Next morning Rob came and picked me up (I protested with my usual loud meows) and took me from the nice warm house, out into a strange place we’d only been a couple of times.  It was very cold outside (I heard them says -35c, whatever that means) and my bladder instantly stopped working.  I was very upset and cold so I just peed – it just so happened that I peed ON Rob, oh well serves him right!

This new place he put me had more of those boxes and Boo was here too.  I think she found a spot in the closet to hide, she’s very good at not being found as she’s black.  This is like a house, with a bed and furniture and stuff, but there wasn’t as much room, and nothing smelled like our familiar things.  We’d have to fix that really soon!

Eventually Rob and Dar came into the new mini house too.  After much cursing and some crying, things started vibrating and rocking to and fro.  Now Boo and I were very confused.  It was like going on a car ride, but it wasn’t a car.  I just hoped we weren’t going to the place we usually go in the car where all the other dogs and cats were and some mean lady pokes me with needles.

A New Day, A New Smell

Well, ultimately we didn’t go there – whew!  But we didn’t go home either. Every day the humans would move stuff onto the bed in the morning, more vibrating, and then later they’d move it all to the big window in the front.  Boo noticed that every day when the big door opened it was different outside.  Different smells, sights and sounds – very weird.  At first we didn’t want IN this mini house, then we didn’t want out cause we thought we’d get lost or see strangers out there.  So we agreed it was best to just hide inside.  One night it got very cold in the mini house and I crawled under the covers by Rob while Boo curled up on Dar’s pillow as close to her cheek as she could.  They may not be the brightest creatures, but we love them and have to take care of our  humans and keep them warm.

Very odd that they don’t have fur.

Oh, the small inside issue gradually got taken care of too.  Each day we’d pee in a new spot so everyone would know that was our area.  We also discovered some really good places to sit.  Boo likes to sit in the big window up front when it’s sunny.  She can watch the stuff outside move from there too when the house is vibrating.  Rob gave me a pillow and blanky on the couch right behind his chair, so I was happy to sit there.  He’d reach back and touch me now and then too, so I’d purr.  Lately I’ve been going in the window too and Boo rides on a warm spot on the floor she found.

Finally all the boxes were gone and the ground outside was the same every day, so Boo start going outside to check things out.  She’s the brave one so I encouraged her to go scout and report back.  She said she could see a dog across the road, but he was tied up so that’s safe – and many other of these mini houses all in rows.  Dar and Rob tried to put collars on us and tie us to a table outside – yeah like we’d let that happen.  Boo got out of hers no problem and tangled the line around and around a chair to confuse them and wonder how she did it.

At night we heard strange scary howling, so we mostly stayed inside.  We noticed too it was much warmer, even hot, outside now.  We heard the humans talk about Arizona a lot.

We Pee In The Bathtub – Sort of

So we cats adapted to the new house and got the humans retrained.  Our litter box is now inside this tub we have to jump up into – the humans pee in the same room which is kinda weird for us but put up with them and their smells.  Sometimes we got locked out of that room so we had to teach them about that.  Usually Dar leaves some clothes on the floor by the foot of the bed – so we used that spot to relieve ourselves.  She doesn’t seem to happy about it when we have to use her pillow or pajamas though.  She should be honored we are marking her with our smell, to show other cats we own her and those spots are where we want to sleep too. 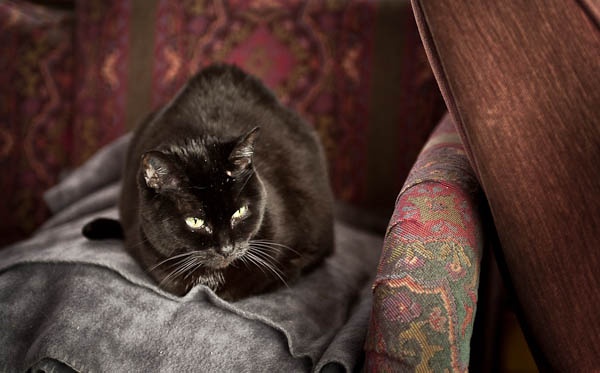 After finally getting some routine again, we packed up and move.  We’re smart cats – we figured out the vibrating is the house moving.  The new place had lots of birds and the humans often went to neighbors while there burned things at night.  Humans do such odd things.  Boo went to see what they were doing one night but she got lost and Rob had to use a light to go find her.   That was scary for Boo, but she did get to hiss at the little dog over there so all was not lost.

Visitors To Our House

We have gotten used to the new places, but still don’t like the moving too much.  We’ve done a lot of that now.  One cool thing is we met Kandace (they called it Florida) the lady we’ve heard Rob and Dar talk to on the phone. She brought two small humans of her own with her and a friend of theirs. I sat in Rob’s chair and let them pet me, and didn’t even hide under the couch.  Seems some new people are nice too, maybe I’ll be more open and not hide so much now.  I kinda liked that Mike guy  that came to visit us a few times too,  he’s nice and pets me.  We thought maybe he was moving in with us, but he didn’t.  Just as well, not much room.

One day after moving, Rob took me out far from the house and put me in a large litter-box.  Boo came out with Dar too.  We didn’t know who’s litter-box it was and we didn’t like how it felt on our feet.  Then the earth was moving towards me and my feet were suddenly wet – we I just put it in reverse and backed up.  I was about to leave when Dar took me back home.  My feet needed cleaning and they tasted all salty – weird.  Boo told me her tummy got wet and her feet were stuck (they probably weren’t really, she’s such a drama queen sometimes) and Rob had to come save her.   We didn’t like that place too much. They said something about taking the cats to the beach? Dunno.

So that’s about it for now.  Rob and Dar often go out all day now so when they’re home we all like to curl up on the couch and watch TV.  At night I sleep by Dar’s hip or between Rob’s feet.  Boo sleeps in Dar’s armpit under the covers with her feet on Dar’s shoulder, or her her pillow next to her, or on Rob’s neck.  We’re very happy.