Ever since we left Edmonton and set out on our 12,000 mile trip through the US and Canada by RV, I’ve wanted my cats to experience the ocean. They’re 16 and 15 years old and rarely ever left the house until recently. I’ve wanted them to experience as many things as possible while remaining relatively safe at the same time. If you’ve been following our blog, you’ll know that our first few days in the RV resulted in so much of Dar’s clothing and our bedding covered in cat pee, so we didn’t know what to expect from their time on the beach.

Pumpkin is the orange cat and Boo is the black one. They’re my Halloween kitties, but born in October and named respectively. Boo is about 16 while Pump is 15. 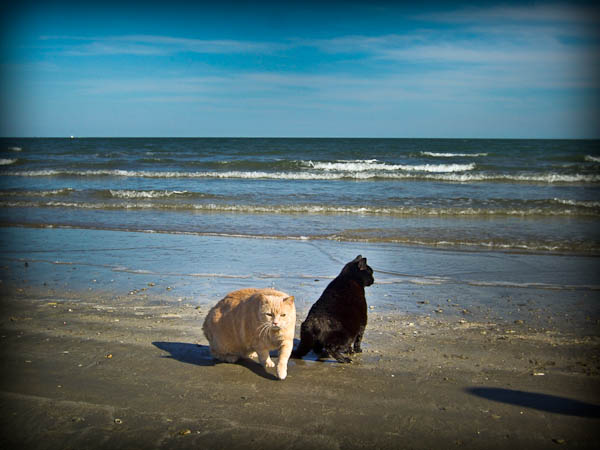 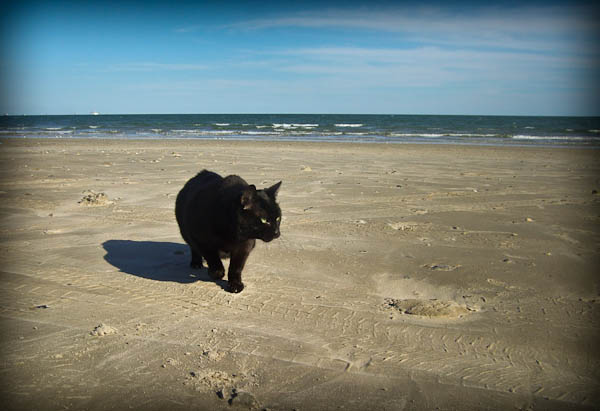 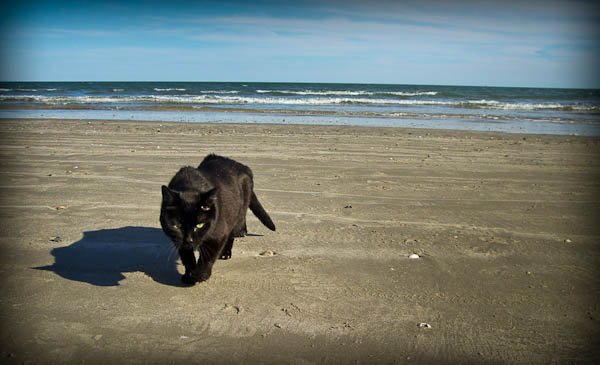 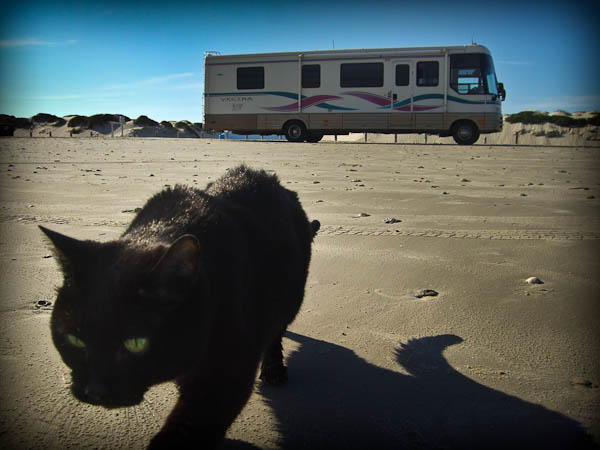 How did this all come about you might ask?

We took our RV to Padre Island near Port Aransas so we could get shots of our rv on the beach for Good Sam Highways magazine. We wanted good shots to accompany a recent article entry we submitted to them, so on day 80 we packed up and left Seabreeze RV Park for the day.

How Did The Cats Handle It?

Another good question. I’ve had some people tell me that they’ve never seen a cat on the beach, nor pictures of cats on the beach and neither had I. I had to walk them out to the ocean as they wouldn’t leave the rv on their own, but that’s not new. Even with the door wide open, they rarely leave the RV to venture outside.

I walked Boo down to the water and put her in about an inch of water. She didn’t move. Her paws sunk about a 1/4 inch into the wet sand. A wave came in and got her underbelly wet. She still didn’t move. I’ve been told recently that what they experienced was this:

They saw water on one side and beach on the other. They dont know what the water was and just saw it as “moving earth” and couldn’t comprehend it. They thought of the beach as a giant version of cat litter and weren’t too happy about walking in it so much.

I do have video of Pumpkin experiencing a wave coming in. She saw it coming and began to back up, but couldnt keep up, so kept accelerating in reverse as it rolled in . I’ll post it when I have time to edit it (seriously lacking time to travel, experience the US first hand AND process images and blog about it).

It was a long way between the water and the RV, so the only thing of familiarity around them was me. They huddled up around my legs. Boo hunkered down and crept her way back to the motorhome. Dar eventually picked her up and she just looked out at various things before we took them back home to safety.

For the record, I love my cats more than anything. I’ll even swear on their life to Darlene if she thinks I’m fooling around about something. That way she knows I’m serious.

At no time were they in danger and I kept them safe next to me at all times. The worst it got for Boo was about 2 inches of water that touched her belly as a wave came in. That was it.

The “cats on the beach” experience was all part of the day we took our rv to the beach, make sure you check it out.