The Dawg House Diner in Dwight Illinois on Route 66 is part of a collection of HDR photography included in our Road Trip 2011 Calendar now available for sale, just in time for and making nice holiday gifts. 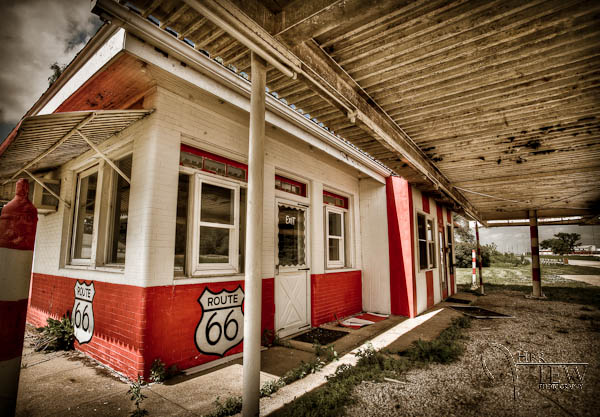 Every picture tells a story and this one is no different. After the first 8000 miles of our 17,000 mile journey, I came to realize that when Darlene photographs her subject, any sort of thing can happen. From the Texas neighborhood watch that approached us within 2 minutes of arriving at the ward lefrance pumper, to a skateboarder taking his goldfish out for a ride, coasting through our shot while the shutter was open.

After a few days in Chicago visiting historical Al Capone sites including his grave site, touring the filming locations of the Blues Brothers and some geocaching, we decided to spend a day on Route 66 in Illinois. It was on our last day in Chicago when waiting to cross the street to the Museum of Art, we noticed the Route 66 mile zero marker on it’s post on the side of the street. We had been to a few parts of Route 66 while in Arizona a few months earlier and thought “We simply have to see Illinois’ section while so close”.

We started out early and made our way from the Leisure Lake RV Resort near Joliet Illinois, through Joliet and south west to Dwight.

Dwight has an enormous amount of history aside from it’s involvement in Route 66. Downtown Dwight boasts the First National Bank building designed by Frank Lloyd Wright in 1905 and the Keeler Institute (now the Fox Development Center) which includes some amazing stained glass windows. I mean really amazing.

It’s also home of one of the oldest operating gas stations along Route 66, the Amblers Texaco gas station. It’s been restored to very near it’s original condition and serves as a welcome center for Dwight. we bought and mailed some postcards from here.

but I get ahead of myself.

We came into Dwight from the north east and one of the first things we saw was this classic American diner. A little run down to say the least and for sale as I recall. Proudly displaying it’s Dawg Diner name on the side opposite from our picture, it stood there along the road in it’s red and white striped brilliance. (Update: Learned later that the most recent name of the diner in Dwight was Big Al’s Hot Dog’s)

We learned earlier from one of our RV magazines that it was national Pick Some Litter day and that RV’ers were encouraged to clean up any liter they found today. We cleaned up around the diner a little before setting up the tripod. It was a bit tricky to get a good angle because of an obstacle in our way (see video), but Dar did her best.

Using a wide angle lens includes objects very near the camera, so like I said, it was a bit tricky.

Video of Dawg Diner on Route 66

Have a look at the rest of the HDR Photography included in the Road Trip 2011 Calendar and then go ahead and order as many as you’d like using the buttons on the bottom of the page. Stunning imagery of places such as Rhyolite Ghost Town near Death Valley in Nevada, the Tombstone Boot Hill Hearse, a couple of shots of a classic fire truck from Corpus Christi Texas, two more all American diners from Rochester New York and Bisbee Arizona, a vintage corvette on a beach and more from Route 66.

The Dawg Diner was our introduction to Dwight Illinois, but we spent over 2 hours in the little town. Beautiful place and “not just a bump in the road.”