I was searching the internet for dolphin tours in the Portland area, and somehow I came across The Dolphin Connection.   A husband and wife team, Irv and Sonya Strong, that have been taking people out to MEET the dolphins for something like 16 years.  They know many of them by sight and have named them – and the dolphins know their boat and their sounds too.  They are located in Ingleside on the Bay, TX – basically around the corner of the bay from our RV park.

Their blog says they have their business up for sale and this might be the last year for them doing this, so I booked us in. We were supposed to go on the Monday but it was way too windy and in the little boat they use, we’d have been tossed around the waves in an undesirable manner.  So we waited a day and headed out Tuesday.

Sonya met as at the dock and right away we were loaded up on the boat and off we went.  No formalities, no waivers to sign, no payments first – just hop in and off we went.  I opted for a life jacket (with my paranoia of water) while Rob opted for none.  It was just us two and them – perfect.

They talked about the dolphins and that their usual schedule has been a bit “off” lately, so we were sure if we’d see any today or not.  They guarantee an encounter with them or you don’t have to pay – hence why no prepayment was done before we boarded the boat – sweet.  Personally I’d rather pay and see them, then go out and see nothing for free.

Irv took us around the bay, looking in the spots where the dolphins usually hang out at this time of day.  They have patterns and tend to hang out in groups he said, but their pattern wasn’t following the usual routine in the last couple weeks so they were having a hard time predicting where and when to find them.  It’s a big ocean – lots of water to cover in a small boat.

We eventually did find one guy, but he wouldn’t come close enough for Sonya to touch him, he was playing coy with us.  But Irv did show us a cool trick where he speeds up the boat and the dolphin basically body surfs inside the wake.  We watched him do it for a while.  Not sure if it’s playing to them, they’re very playful animals, or an easy effortless way for him to get from point A to point B.   It’s like a kid putting on roller skates and bumper riding, same concept. 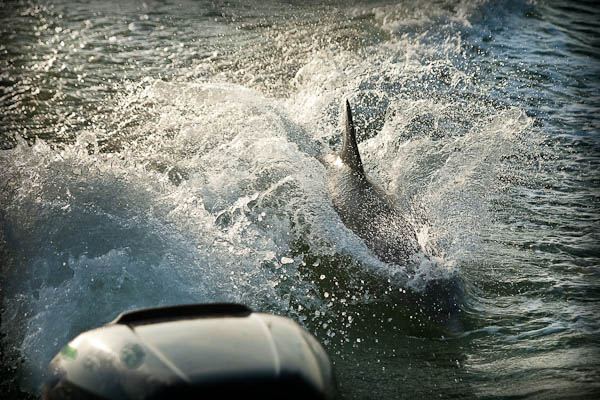 We did see a couple more but nothing close enough for us to touch.  They just were not in the mood today and we didn’t find the big group Irv was looking for.  We still had a great trip though and as was indicated we were not required to pay, but voluntary donations towards gas were welcomed.  We left them some money anyway. 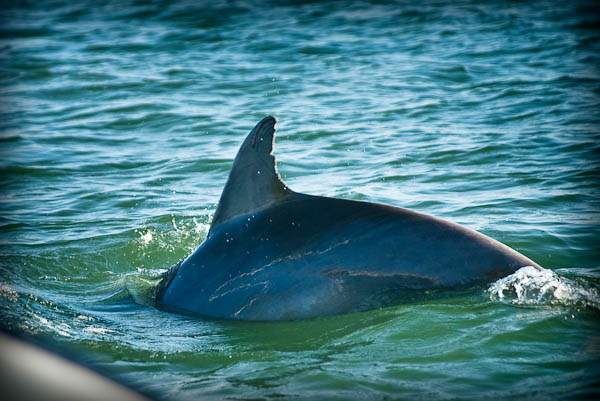 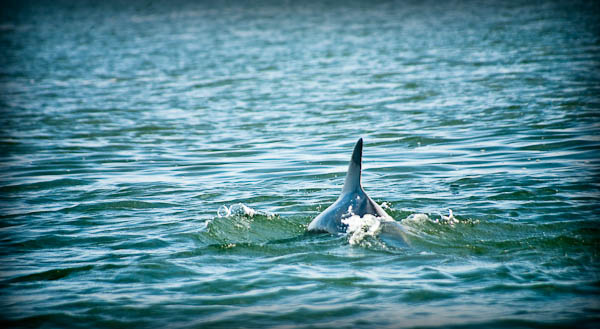 We said our goodbyes and thanked them for the ride and I took a few photos on the beach before we headed out.  I’m really hoping they hang in there for another year so we can go back in 2011 and give it another go with them.   Yup, that’s my intention – they will be there and we’ll go again and see the whole herd/tribe/gang – whatever it is you call a group of dolphins.

If you’re in the Corpus Christi or Portland Texas area, I highly recommend doing this dolphin tour.  It’s only $25 per person and you get a small personalized tour with people who know and love the dolphins.