After being up so late dealing with cat pee the night earlier, we slept in a bit and then went to Walmart first thing in the morning to get cat supplies.  The cats have been great in that they could have been scratching a lot more then they have been but have been controlling themselves.  Knowing cats very well, Rob could sense the tension building and wanted to give them an outlet.   3 scratching devices were purchased, filled with catnip and laid out in the motorhome. They went at them immediately!

The car was loaded back onto the dolly, tightened down, power unhooked from it’s supply and the RV legs stored away for travel.

It’s been a blessing that we travel with our toilet facilities and do not have to stop every few minutes for Dar to relieve herself, but as convenient as it has been, Rob still has to find a place to pull out of the way before he can do HIS business.

Today was to be a 5 and a half hour drive from SLC to Mesquite Nevada according to google maps and traveling the speed limit of 75 mph.  However, for the motorhome to achieve a speed of 75 mph, it would have to be a BIG downhill grade and even at that, would not be safe.  With our reasonable 55 to 60 mph, we are more fuel efficient but a bunch slower.  The 5.5 hour trip will take closer to 7.5 hours.

On one of Rob’s pee breaks, Scipio Utah was chosen, as it was recommended by a photographer friend, Adrienne.  She told us at our going away party that there was a set of unique antique gas pumps in front of a gas station there.  Scipio is a VERY small town and the pumps referenced were easy to find. 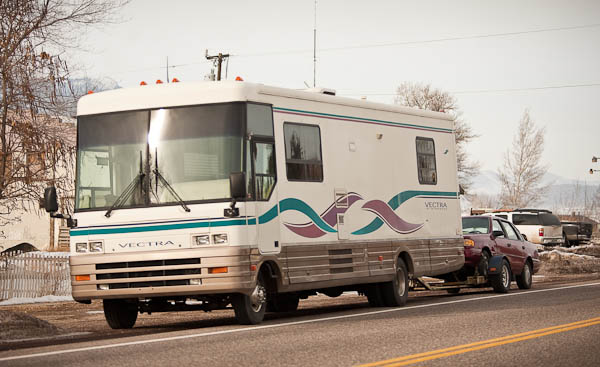 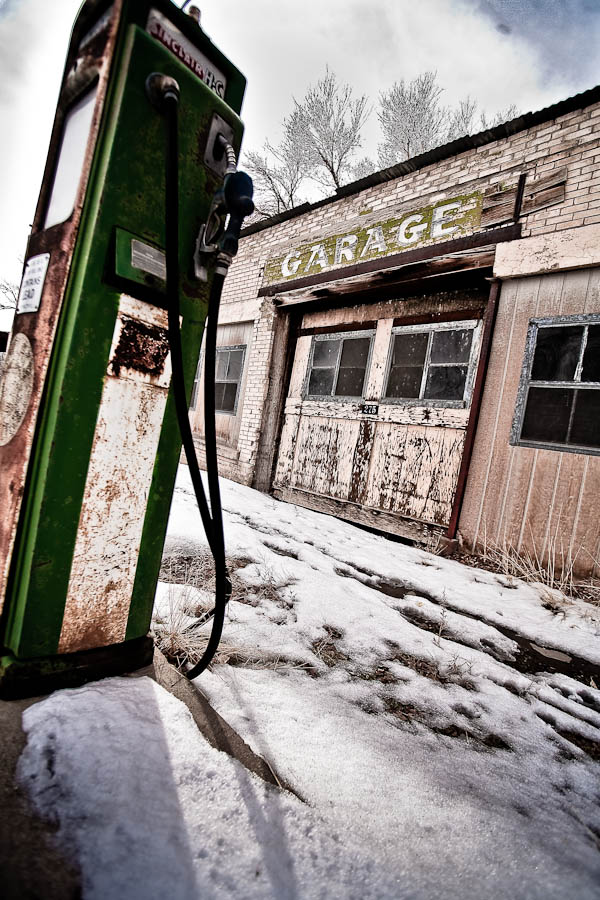 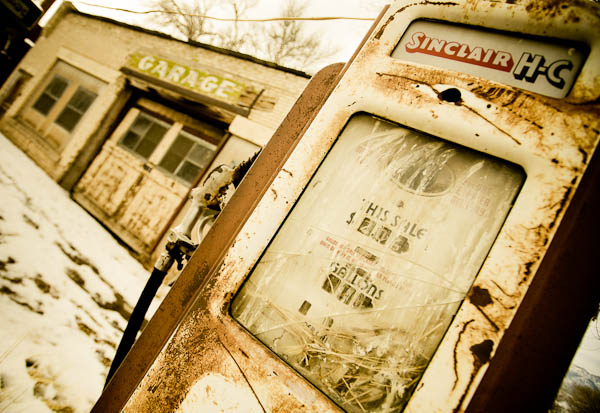 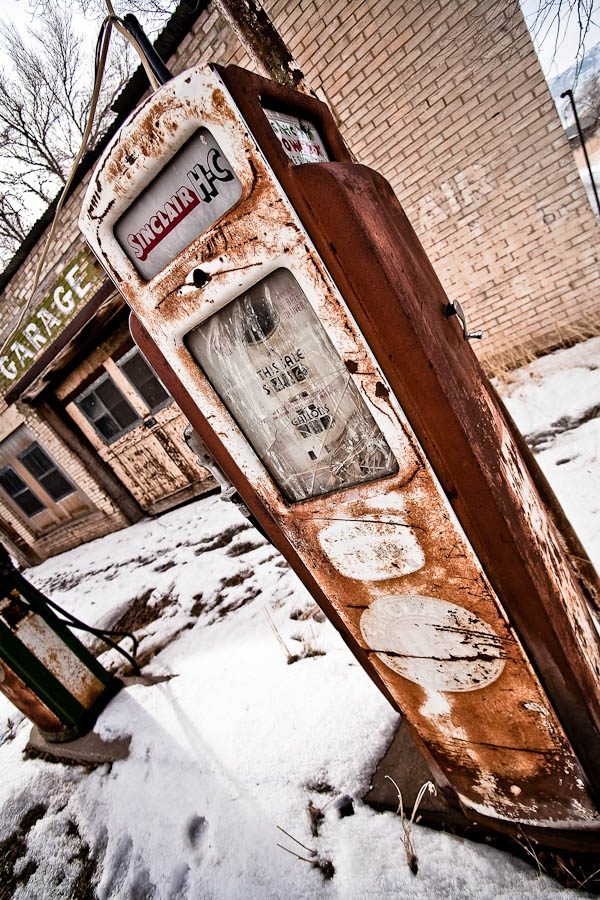 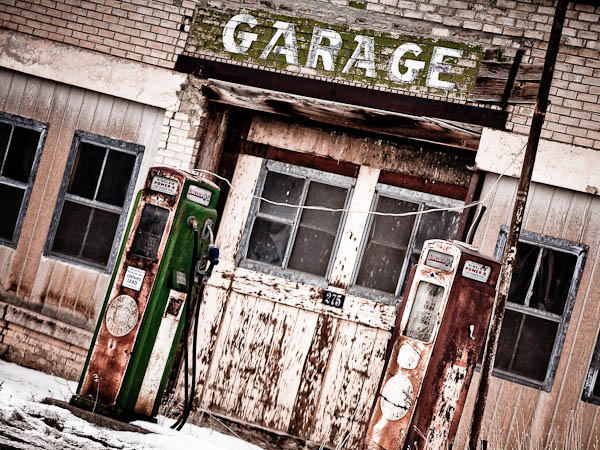 After a short 3 minute jaunt, Rob discovered a very interesting antique shop down the road.  His attention was immediately drawn to a compound bow and arrow displayed outside on the front steps.

Rob once owned a compound bow when he was growing up and for the past few weeks had been imagining owning one again. He visualized the bow and the razor tipped arrows he wanted.  Alas, his powers of manifestation were working quite well and the Universe provided.  Tagged at an already fair price of $35, a talk with the owner provided a 20% discount for a new low price of $28.  Rob asked the gentlemen, “Do you take Visa?” to which he replied, “No, but I’ll take a cheque check!”.

Rob got his bow for $25 cash and stored it away in the RV basement. 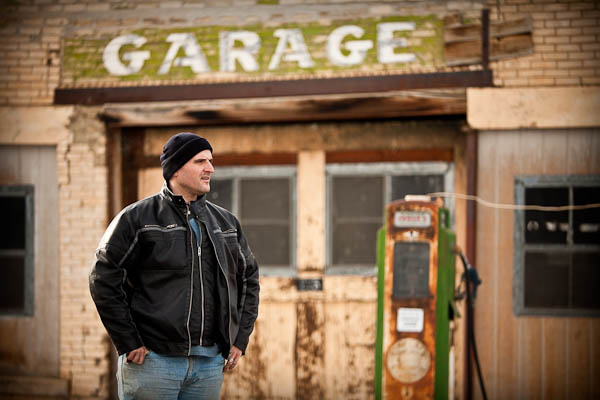 We got back on the road heading south trying to make up as much mileage as possible before stopping for lunch.

After seeing all the Mexican restaurant signs in SLC, we wanted some.  Signs on the highway indicated Kan Kun Mexican Restaurant in Beaver Utah, so we slowed down and exited the freeway.

After a wonderful vegetarian Mexican meal, Rob got in 20 minutes of walking while Dar took more photos. 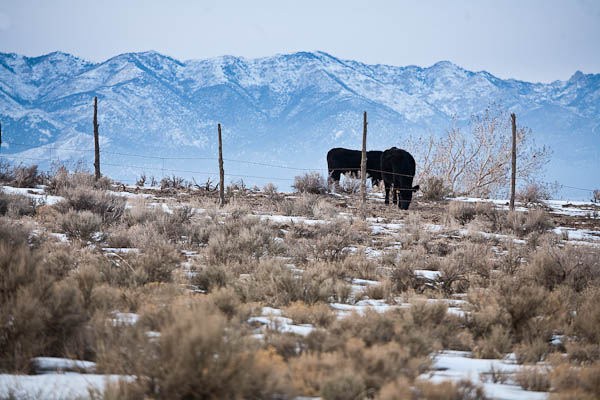 We decided to gas up before leaving.

This was our first tank of gas after putting the quantum magnets into play.  After testing the quantum energy patches on his Jeep over the past few years and the magnets on the Topaz, we were expecting great results on the RV.

20% Increase In Fuel Efficiency on Our Motorhome

Calculations showed that the RV had a 20% increase in fuel efficiency.  We were able to travel farther and use less gas.

We got back onto the freeway and headed for Nevada.

As we left Utah, we had to cut through the corner of Arizona before entering Utah.  The signs indicated over 12 miles of downhill grade sporting a healthy 5 to 6% grade.

Rob’s short 5 day experience with hills has shown him that the RV is basically made out of lead and proven Galileos theory that an object in motion tends to stay in motion quite dramatically.  The best way to tackle a steep grade is to slow down to 80 Kph, disengage the overdrive and let the engine do most of the work slowing down.

We pulled into the Oasis RV park in Mesquite at about 7 pm Nevada time.  After putting the legs down and plugging into power, Dar’s initial scouting trip discovered that there were no services here.  What do you expect for $16?  She was keen to spend the evening washing cat pee items, but there were no laundry facilities working at this park.  No key to the bathrooms either, so we packed up to head a little further down the road.

After checking in at the Casablanca Resort and RV park for $21, we found our pull through location around back of the casino.  There was NO way in hell that our motorhome, tow dolly and car would fit in that space, let alone make the corner needed to pull in.  We would have been 10 feet over the length of the slot.

We talked it over and decided that the hour it would take to unhook the toad and tow dolly, then rehook in the am would not be worth the convenience of the laundry.  We drove out and headed back to the lobby.  Dar went back to get a refund while Rob drove back to the original RV park a block down the road, and Dar walked back to meet him there.

That single block turned into 15 blocks as there was no left turn and no place to turn around until he found a school with bus access.  It’s not easy turning a 34 foot rig towing a 20 foot trailer and car.

All leveled and hooked to power with the car attached, Dar arrived after her 9 minute walk from Casablanca.  We settled in and watched the Thursday night episode of Survivor Rob saved 2 days ago.