As the winds had now died down, we were cleared for leaving.  Rob wanted to go on the tour of the Hoover Dam so that was our first stop.  When entering the dam area, vehicles have to go through a security check point and they stop all RVs and do a search of the underneath compartments, and inside.  We did that, no problems, and they security guard told us that RV parking was lot #13.

We passed that lot and it was too tight a turn and small for the RV and car, so we kept going.  #14 was just a roadside turn out and was completely empty.   Initially we stopped there but Dar wasn’t happy parking on a slant like that so we decided to go up the hill one more lot. 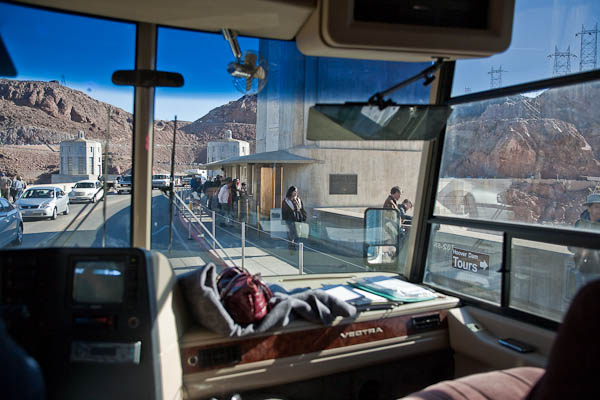 At that particular lot, Rob couldn’t make the turn and had traffic piled up behind us – so onward we went.  We soon realized that was the last parking lot (or first if you come in from the AZ side) and there was nowhere to turn a big rig around to go back.  Now we passed out the security on the other side and were soon 5-6 miles past the dam.

Dar knew Rob really wanted to take the dam tour, so suggested he pull over on a wide shoulder, unhook the car and take it back there, while she waited in the RV.  That’s exactly what he did. 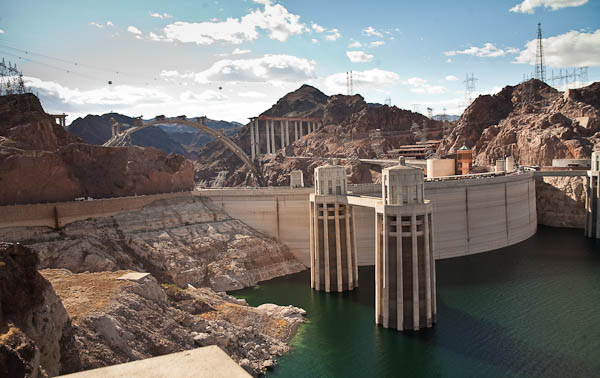 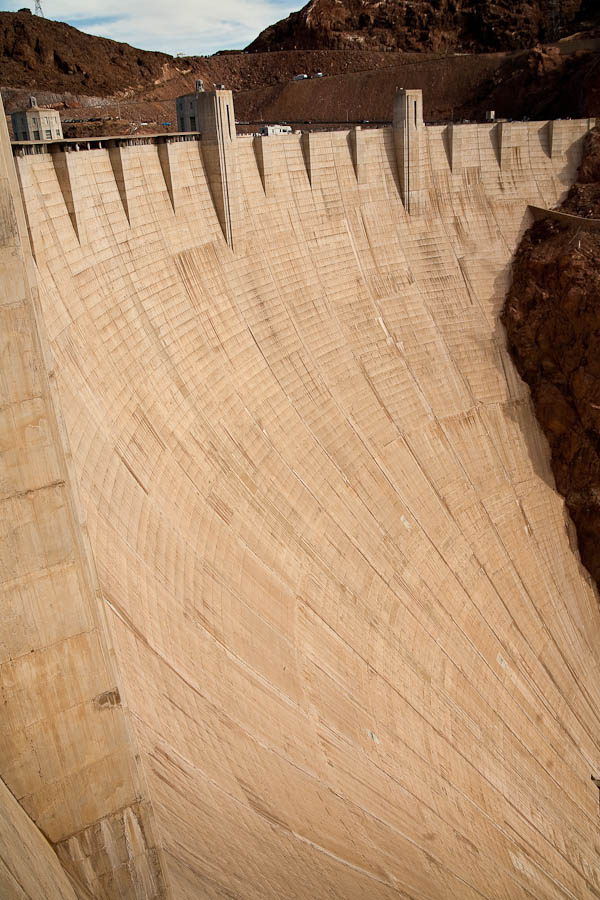 Two hours later, Rob returned, after having taken the Power Plant tour (was a 2 hour wait for dam tours) but he seemed satisfied with that.  Next stop Kingman, AZ.

Arriving in Kingman about 5:30pm (we gained an hour coming into AZ from NV) we wisely decided to stop at Safeway and get food for tonight and tomorrow as stores may not be opened and we’re pretty much out of fresh items.  The store closed 10 minutes after we left, so our timing was impeccable.

We successfully found the Zuni Village RV Park, but as expected the office was closed for the holidays already.  I’m actually surprised by the self-serve nature of many of these parks.  If you arrive after 6pm you just park where you find a spot and they trust you’ll register and put your money in the slot, even if you leave before the office is opened.

The night manager that checked us into our very first park in Great Falls, MT said he is just a guy that lives there and noticed many people leaving without paying so they appointed him night manager.  But I wonder how many parks lose money because of this honesty approach??

We spent Xmas Eve pretty much unaware of the holiday going on around us.  People keep wishing us Merry Xmas and we’re like “oh yeah, it’s the holidays”.   Dar did miss being at her mom’s house for her annual open house though.

***things we saw – a road runner, and some young bighorn sheep.  Finally, some wildlife!!!

That when you have a parking place for the RV at the Hoover Dam, go with it and don’t second guess it cause there’s no going back.