I had planned our entire Texas stay in Portland to make sure we stayed long enough to go to the Fulton Oysterfest, about 30 minutes north east of Sea Breeze RV park.  I had no idea what the Oysterfest was all about, but I love raw oysters so I wanted to find out for myself. 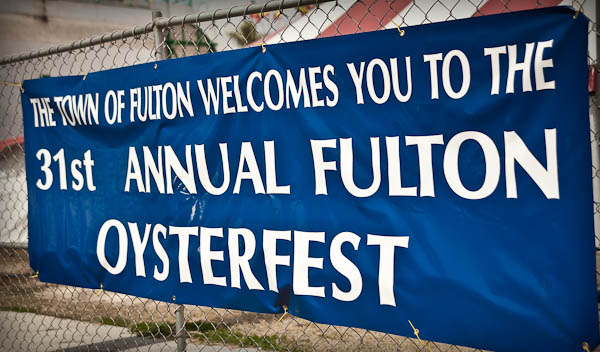 We dragged our butts out of bed late as usual and headed out to get there for around 11am or so.  I had read on the official festival site that there was a parade and free parking at the old Walmart lot, which we just happened to stumble upon a few days ago.  So we parked there and got in line with the 200 or so other folks waiting for the free shuttle bus.  It came and took about 12 people, and round trip is 15-20 minutes, so we figured we were gonna be in line a while.

When we finally got to the festival site the parade was still going down the street, so I rushed to catch up to it.  I do love a good parade – Rob is indifferent to them. As it was coming up to St. Patrick’s Day soon there was lots of green, and locally made floats and school marching bands, and some uniquely Texan things. 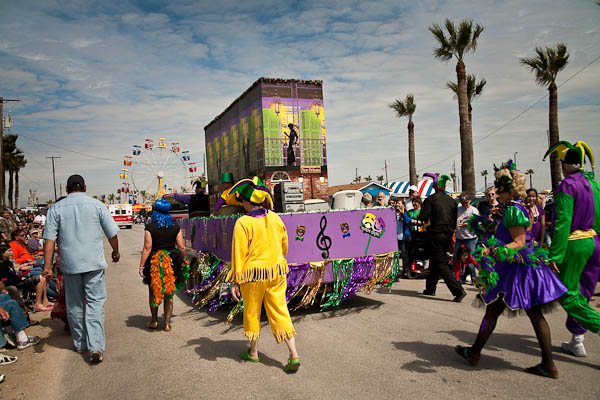 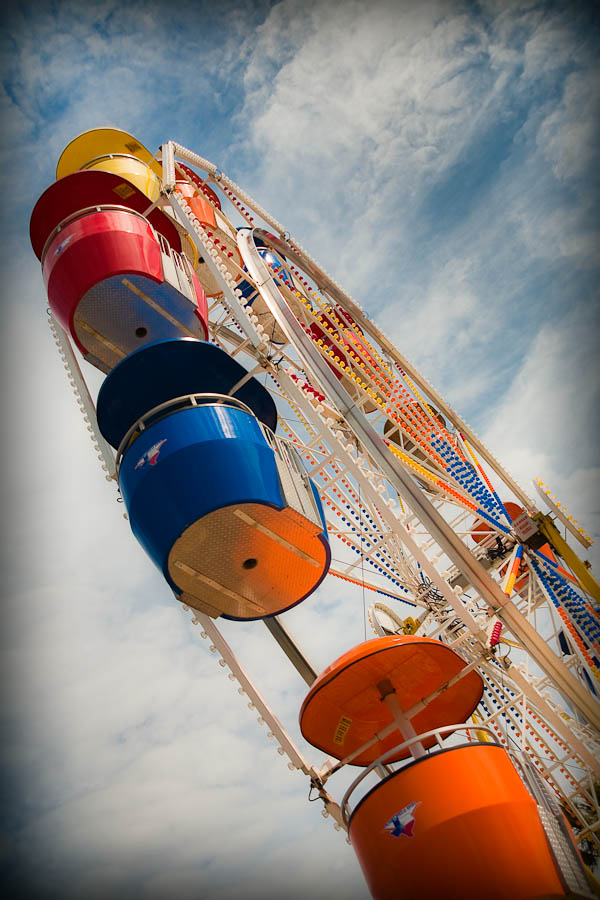 And then we entered the festival grounds!

Let the eating commence!   And so we did.  Rob started with the BBQ turkey leg – I think I got one bite.  Then we each had a dozen raw oysters, then another dozen later.   Rob thought we were going to have like 4-5 dozen each.  They were fairly cheap at $8 a dozen – and really tasty – but that’s still a bit costly, so we stopped at 2 dozen each.

Rob’s comment: As far as I’m concerned, any “fest” requires large amounts of the “fest” item to be consumed. If it’s a beer fest, one consumes large quantities of beer. If it’s an Oysterfest, the same should be true. That’s my opinion anyway. 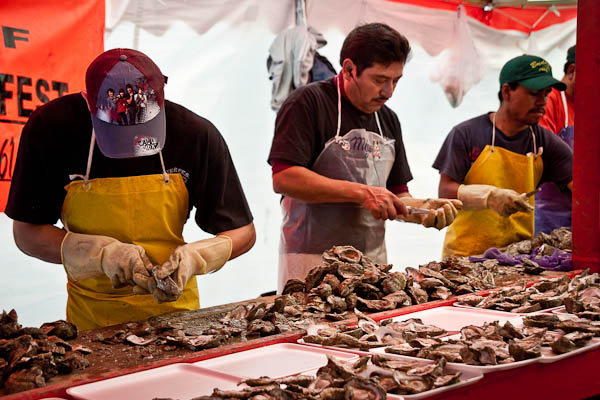 We even got on local TV (of sorts). The Corpus Christi Caller Times, a local paper, had a camera crew out to the fest. She came by while we were eating and video’d us. She must have liked us because she came back 5 minutes later saying that her “white balance” was off and wanted to video us again. Later that night Rob checked the Caller Times website and found the video of us eating oysters.

After satisfying our oyster needs and listening to some country music, we went to browse the other tent with crafts, art and stuff for sale.  I actually found cowboy boots on sale for $10, so I had to buy a pair.  There was a photographer with some great bird shots from the area, and some great art.

Next we saw a crowd gathering around the stage as the men’s oyster eating contest began.  We couldn’t really see that well but Rob got a few photos over the tops of everyone’s heads.  I’m not quite tall enough to do that without a ladder.  There were about a dozen guys in the contest and it lasted about 5 minutes.

After the time limit was up, they had to sit and wait another 5 minutes to make sure they kept them all down.  Any that come up don’t count, or maybe that guys gets disqualified – not sure.  So after the waiting was done they announced the winners.  The top oyster eater swallowed down 200 of them in the allotted time!  WOW!  Impressive.  We didn’t get back the next day to see the women’s contest but I’m curious to know the numbers from that one.  That is a LOT of oysters.

Lots of birds overhead so I tried to get some good shots of them flying.  This one above I thought came out kinda funky with only half a bird.   The one below is one of a bunch of them we saw playing sort of leap frog.   They all sat on their own post, all in a row.  Then when a new bird came in for a landing, he’d almost land on the bird who was last in the row, who in turn would get up and fly up one to land on the next bird and so on until the one at the front got bumped off and had to go find a new spot.  We watched them do it again and again – our video camera batteries were dead so didn’t get video.  Animals do the funniest things – I’ve said it before but will say it again – if you have animals you don’t need TV!

So we decided we’d had enough and headed back via shuttle to get our car.  On the way out of Fulton we took a detour to drive by Fulton Mansion.   It was closed already so we put it on our list to come back and tour next year.  The Fulton Mansion was built in 1874 it had features that were highly innovative for that time period including:  gas lighting, central heating and indoor plumbing with hot and cold running water.  Rob was interested in their water saving and recovery system – we’ll be going back for a closer look when we have more time. 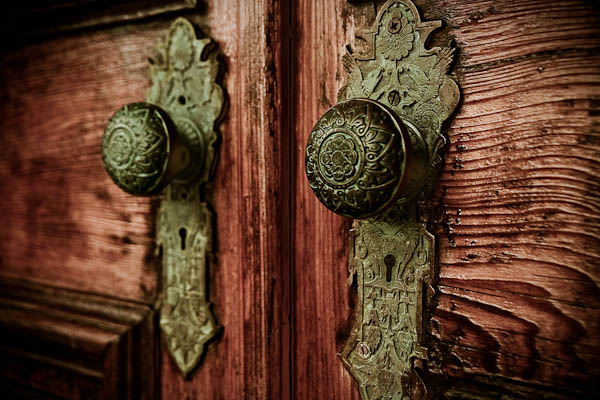 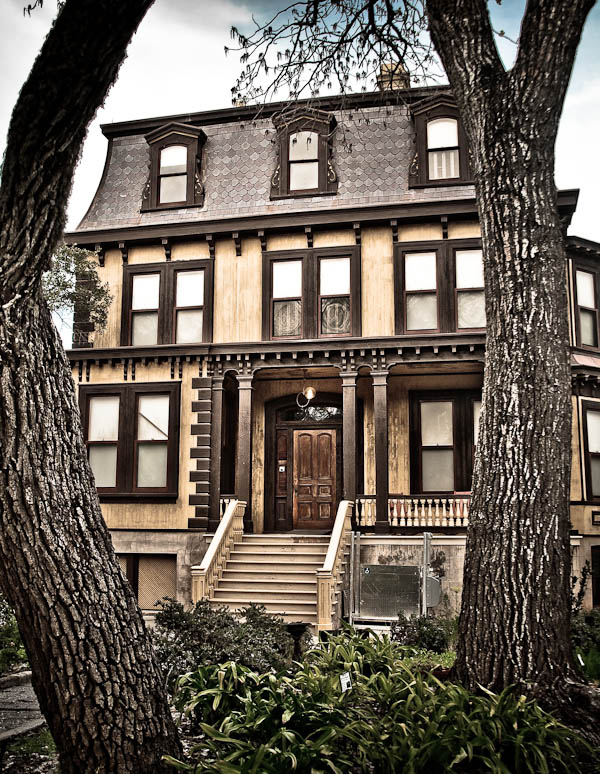 All in all we had a great time at the Fulton Oysterfest and plan to do it again next year when we return to Texas.