The 21st Winter Olympic Games in Vancouver had already started and we participated in the annual Sea Breeze RV Park version of their Olympics.  The day before kick-off, each of our team captains came to find us (we were on different teams) to talk strategy and meet their new team members.  It seemed pretty serious.

The first event on day 1 was the scavenger hunt.  We were given a list of items to gather and there were points for coming in fastest too, so timing was a factor.  We had to find things like canned corn, state flags, seashells, a recipe for crab cakes, a long shoelace, Elvis stuff, red lace panties and prints of photos of our team in places around the campground.  My team separated to scavenge and agreed to re-congregate to take our photos.  I went to the RV to get what I knew was there.  Rob came in looking for my red panties but I had beat him to the punch.  He was printing his team photos when I left and stole the shoelace out of his hiking boot, which was under the RV.

It never crossed my mind that he’d pull a stunt like this, but apparently that’s how the male brain operates.  I came back to print my photo and the printer wouldn’t work.  No power.  I checked the power bar – nope, all good there.  Then the cord from the printer to the power bar – it was missing!   WTF!?  He sabotaged me the bugger!  That’s dirty pool I say!  Undaunted the girls in the office let me use their printer which luckily had a slot for memory cards.  When I saw Rob he played all innocent.  Game on.

The second event in our Seabreeze RV Park Olympics was after lunch, the bean bag toss.  Pretty simple – each team member throws 4 beanbags – highest team score wins.  The events were all pretty non-physical, keep in mind many of the players are over 70 or even 80 years old.

Day 2, Robs “pink” team took control of the games winning both the sponge game and the bocce ball tournament.  The sponge game required each player to put a sponge into a bucket of water, pick up as much water with it as possible, run (or walk) 20 feet or so to a second bucket and squeeze out as much water as possible – all using only one hand.  Rob claims to have a secret technique, he must have, or he cheated again cause Pink won that event.

The afternoon event was Bocce ball.  I’ve never played before and Rob played once before.  He know boasts that he’s undefeated and never wants to play again – as they took that event too.  Bocce is kinda like curling or shuffleboard except our playing surface was a tad bumpy (lumpy grass).  But we had lots of spectators and fans cheering us on.  It took the better part of the afternoon to play a whole tournament.

Rob’s comment: My first game of Bocce ball was played on the beach of Vancouver Island while I was hiking the West Coast Trail. I won the game. After another day of playing 2 games of bocce ball at the Seabreeze RV Park Olympic Games, I remain undefeated. I’ve never lost a game. I’m not attached to the game at all, so quitting while ahead leaves me with a perfect record.

In water balloon toss each team had to successfully throw one balloon twice, between two partners, without breaking it and that counted as one point.  It was funny to watch, many of the women caught it with their boobs.  I was forewarned to remove all rings, good idea.  Some teams got el zippo, nada, zilch.  I think we ended up with 2 points and Pink won yet again with 4.

In egg toss, teams had to line up facing each other and were given 4 eggs with which to score.  No, not by throwing them at the other teams!   I wish. To get one point teams had to complete 10 tosses with the egg still in tact.  If you dropped one, you could start again at that point with a fresh egg but the more you dropped the less points you could potentially get.  And yes they were raw eggs.  I didn’t get photos of this, didn’t want egg on my lens.  I think Rob got some video but his laptop has bitten the dust so can’t get to it right now.  Look for it later maybe.  I hear the event was messier last year, but a few people did require a bath afterward.  I successfully completed both receiving and tossing 2 eggs – redeemed myself a bit as I had broken 2 balloons by throwing too low to my partner.  I got the technique now – watch out next year.

The final game was ladder golf.  You throw a thing that has a golf ball tied to each end of a short rope and try to loop it over horizontal rungs (like a ladder).  My team won our first game and advanced as did 2 other teams.  But the Pink team got a buy into the final because they had the largest point spread in their win.  Well laa dee dah!   My Orange team went on the win the bronze match to meet Pink in the finals.  It was a hard fought battle but in the end Pink once again triumphed and had enough points to take the Gold medal.  We had to settle for 4th, out of the medals.  But it sure was fun and a great way to socialize with people and get out in the fresh air.

Rob’s comment: just to be clear, and summarize what Dar’s saying in the paragraph above – My Pink team met her Orange team in the finals of ladder golf and the Pink team defeated the Orange team to take first place and get the Gold medal.

They had a wrap up BBQ (hot dogs and chips) and presented the medals.  Now we have to come back next year.  Rob has to defend his title and I want a rematch to kick his butt!

You can see Rob’s Kombucha Tea brewing on top of the stove in the background to the left. He’s got a 2 gallon glass container and a 1 gallon container brewing up there. It was nice and warm in The Place, and the Kombucha loved it.

There was one extra event which we ended up running on the Monday, but didn’t count towards the medals – it was just for fun.   Blind golf cart races.  So one person gets blindfolded and the other seated next to them has to direct them around the course which twists and turns around a series of pylons.   Quite hilarious to watch the navigator pointing which way to go – cause of course the driver can’t see that!  Or them telling the driver to “go” or “step on the gas” and the driver thinks they are moving when they aren’t.   Good game for husband/wife teams to try – just like real navigating the RV out on the road – lots of yelling “no no!” and some cursing, and sometimes running the curb or innocent bystanders. 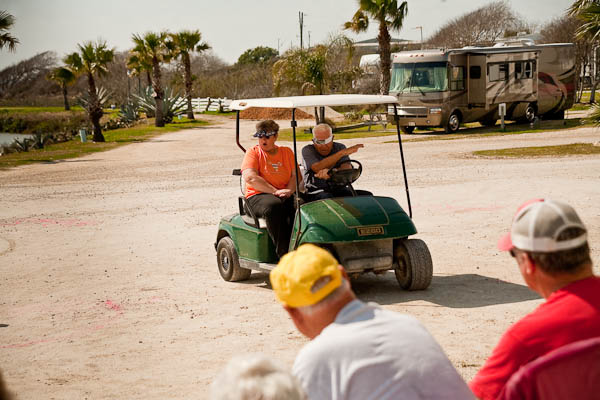 We did it twice – once with Rob driving and once with me driving.  We had a better time when I navigated, not sure if that means he’s a better driver – or I’m a better navigator or what.  We decided to leave that one alone.

This is the fourth year they’ve held the Seabreeze RV Park Olympics and they’re sure to keep going as long as the winter Texans all return. We enjoyed our time playing the games, the fellowship and time out of the RV itself. I’m not sure if any other RV parks do this sort of thing, but that again is just part of what makes Seabreeze RV in Portland Texas unique.