We drove past this fire truck just about every day when we were staying at Sea Breeze RV Park. Every time I went to the gym or we drove to Corpus Christi we saw it. It just sat there along the fence, under the tree, all alone, asking to be loved. We planned a couple of shots.. some basic ones, some using a special technique that would result in an HDR Photograph of a fire truck and then a technique Dar has used in the past called “painting with light.” 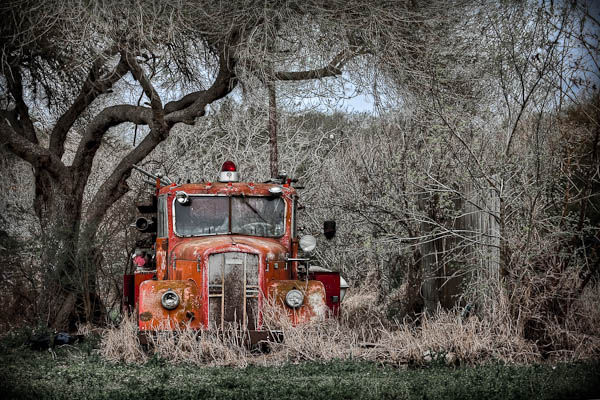 We drove up to the lot where the fire truck had been parked for what seemed like years. We got out and I began extending the legs of the tri-pod. HDR Photography requires that each shot taken has to be exactly from the same location but then with the different exposures and such within each photo. I am only beginning to understand the technique, so forgive me if I get some of it wrong.

As we took our time having a look, and choosing the angle, a fellow from across the street approached me.

Ah ha.. the owner of the truck obviously, living across the street, had parked the fire engine here and then forgotten about it. Barking dogs had roused his suspicion, and he must have looked out the window.

“Well, ” I began to say when another truck came around a corner a little up the street and then pulled across the road coming to a stop in front of mine.

I turned my head to see who I soon came to learn was Lupe J Jimenez, the actual owner.

In less than 5 minutes, one fellow was on his way across the street to check us out after having called the owner to say “there’s some people messing around with your fire truck, you better get your arse over here!” 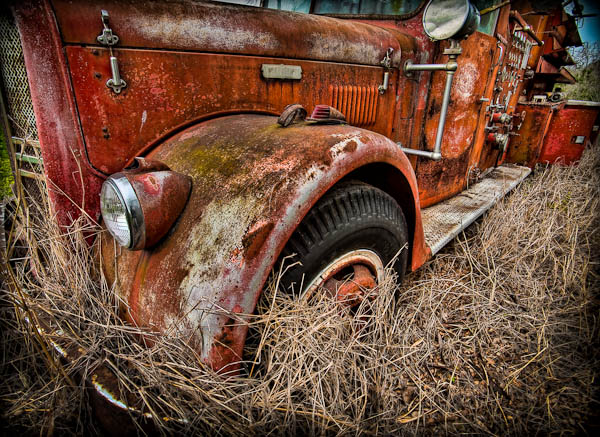 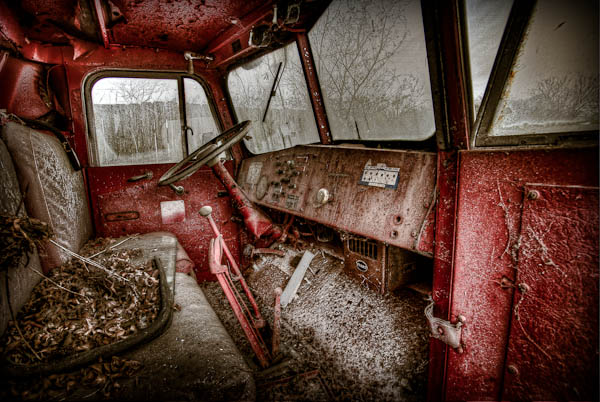 While Dar continued to take photos, I introduced myself to Lupe and assured him that we were simply photographers wanting to capture this amazing classic vehicle. I couldn’t help but ask about the neighborhood watch they had in effect and comment on how well it worked.

“We all take care of each other”, he said, that much being obvious.

We chatted about the history of the fire truck and what he plans to do with it. In short, we learned that he may have bitten off more than he could chew with this one, and is more interested in selling it than doing any sort of classic auto project. If you’re looking for a used fire truck for sale, I’ve been given permission to give you Lupe’s phone number and email address. You can reach him at 361-728-4373 or by email lupejj (at) charter (dot) com. Might be (dot) net though.

Before he left, we explained that we wanted to do a second set of images taken at night where we use the special “painting with light” technique, and that if he heard any reports of people around his fire truck with a lot of flashlights, not to be alarmed… it was just us again. 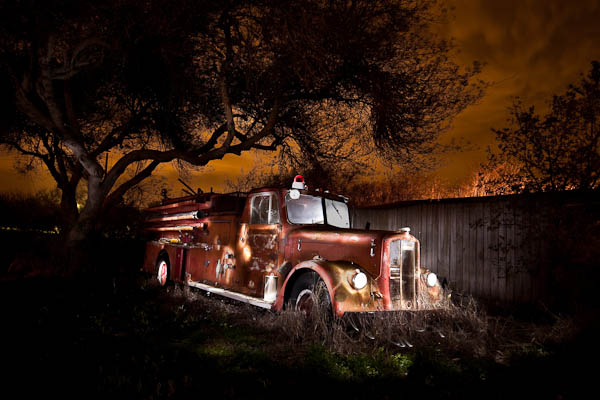 Bear with me as I attempt to explain how this is done.

The photo above is a combination of about 7 different photographs. The tripod is set up and for between 1 and 2 minutes, the shutter is kept open. It’s completely pitch black out, with little or no ambient light. While the shutter is kept open, someone begins to light up or highlight sections of the truck with a flashlight… bringing attention to certain details. For example, the headlights and the chrome around the headlights or the hood ornament, the wheel wells and the door handles. Then the shutter is closed.

That’s right. There are people within that photograph. However, you dont see them because a) it’s pitch black and b) over a long exposure, the person actually becomes a ghost in the final image.

Then, it’s done again, but highlighting a different aspect. For instance, for 2 minutes in one of the shots, I’m behind the drivers side door waving the flashlight into the passenger area, through the front windshield (from behind) and then through the cherry on top of the cab. Then in yet another shot, Dar goes to the rear and lights up the rear wheels and the piping along the upper rear of the fire truck.

Details in the trunk of the tree and the lower branches are lit up in another shot as well.

The only real “trick” to watch out for is not to point the flashlight directly at the camera. Doing so results in a “hot spot” or “trace” effect.

During processing, all images are combined and the result is what you see above. A 1956 Ward LeFrance Pumper fire truck, in the dead of night, surrounded by darkness, but “pained with light”. Very cool stuff.

It took a day and a night to get the photographs we wanted and I would like to thank Lupe for allowing us access to, and his time spent with us, telling us about the fire truck. It was great getting to know the owner after having driven past it for so many weeks. By all means, please get ahold of Lupe if you’re interested in making him an offer. It’s not too often you find a classic fire truck for sale.