Home » Blog » Outtakes » Pulled Over By the Arizona Police

We had left Destiny RV park in Goodyear Arizona and were heading to the Meteor crater outside of Winslow driving up the I-17 when I saw this in my rear view mirror. 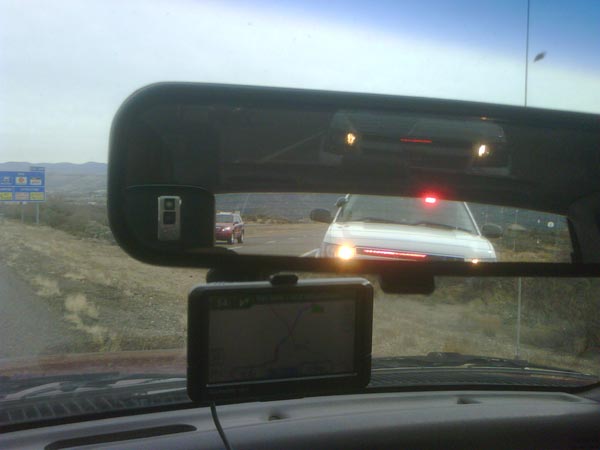 I saw him sitting in the middle of the road back a ways, but I was pretty sure I wasn’t speeding. Dar and I noted that the speed limit on this interstate changed A LOT from 55 to 65, to 55 to 65 to 75 to 55 and all over the place. It changed A LOT!

He pulled us over and asked me how fast I was going. I said 69. I had actually looked at my GPS when I saw him and noted that I was going 69 MPH. With my speedometer being in KM’s as the primary unit of measurement, I trusted the GPS more than my speedo. The little MPH numbers are hard to read or judge accurately.

So the officer was amazingly nice. Stated right off the bat that we were not being ticketed but rather getting a warning. He had to prove to his bosses that he was putting in some time out there, so had to write us up. Came back with a warning sheet and again apologized for stopping us.

Getting pulled over by the Arizona police was a very nice experience actually.