Today is a great day numerically – 1.10.10. After visiting the local Goodyear Swap Meet (really a big flea market outdoors) and finding some cool stuff, I set out for the Litchfield Native Festival where I was to see the native hoop dancing of Moontee Sinquah, Arvel Bird and Tony Duncan.  I love all things native – the art, the dancing, the culture, the stories, the legends – and the people. I was not disappointed today, I got them all!

I paid my $8 admission fee – more than reasonable – and headed straight for the stage at the back of the park. Arvel Bird was playing, he is an award winning Metis musician. His music very much reminded me of what one hears in Quebec or even northern Alberta. I bought one of his live CDs that included stories of the totem animals.  I’ve learned my birth animal is the cougar or puma and it was on there, so am interested to hear his story.

As I had wandered up to the stage I notice a man, Moontee with a bunch of hoops.  I asked him excitedly if he was going to do the hoop dance – which I love – he said he was, with Arvel, and again at 3pm with his sons.  We chatted for a while and I talked to his brother about his art, which was stunning.  When he was called up on stage, Arvel Bird said he had won first in the senior class for hoop dancing and that he had the best knees ever – which evoked laughter from the audience and a big grin from Moontee. 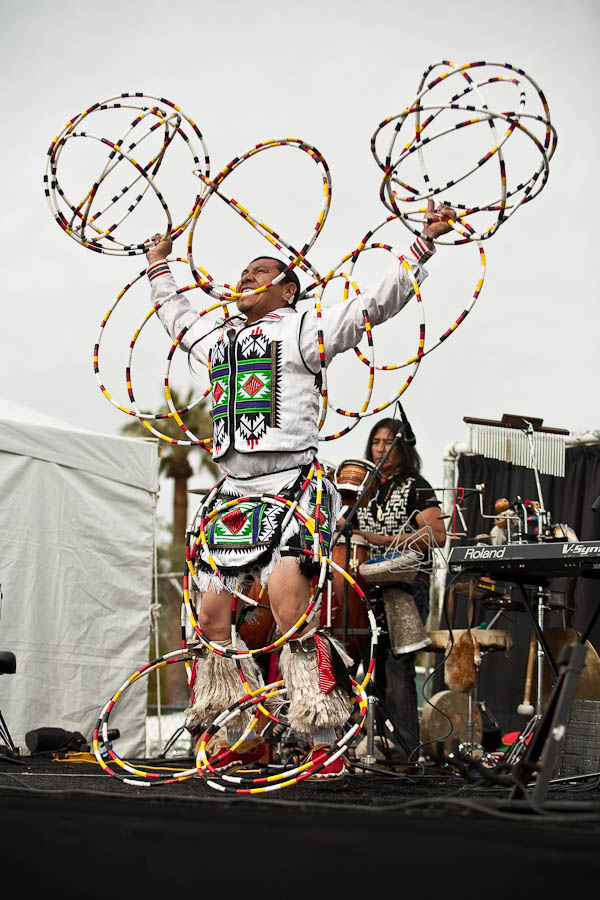 Next up to dance was Violet Duncan, from Alberta no less.  She did a metis dance demonstration which was nothing short of cardio endurance for about 7-8 minutes.  I found her stunningly beautiful and I wanted to photograph her more. 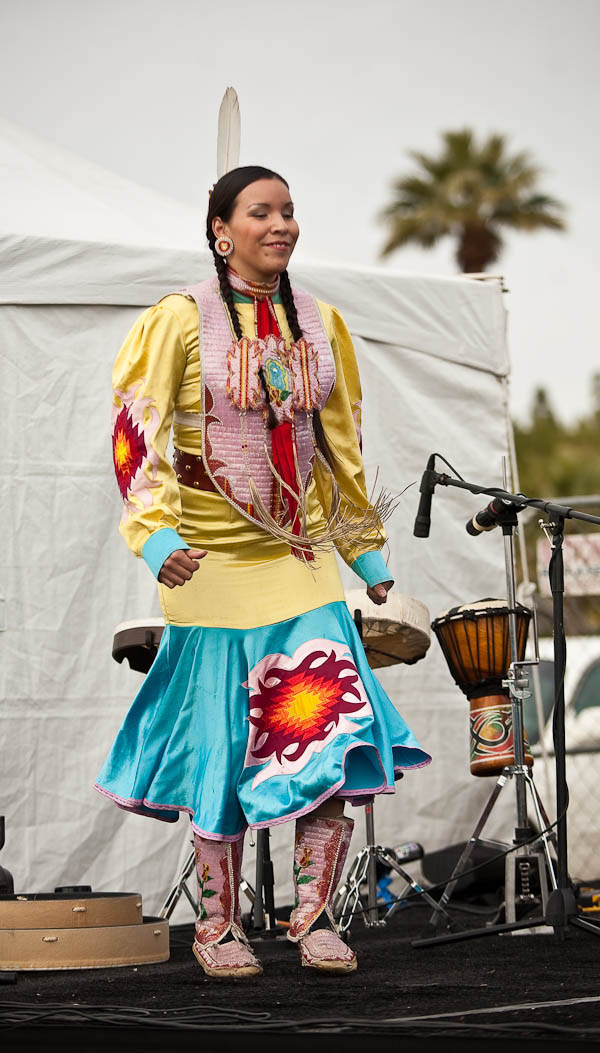 As I walked around the stage area, I didn’t want to go to far and miss anything, I found the neatest hand made silver jewelry.  I bought an ear cuff, a lizard, that sits with his nose just inside my ear as if he’s whispering to me.  Most unique.  They also made these necklaces that when you’re not wearing them, sit on a little piece of sandstone on a pin.  You burn sage and set it on the rock to attract all you desire.  I really wanted the eagle, but at $95 I couldn’t do it.  I did take their catalogue – maybe another day.  They were to perform next also.  He dances, plays flute and she dances and writes and reads poetry. 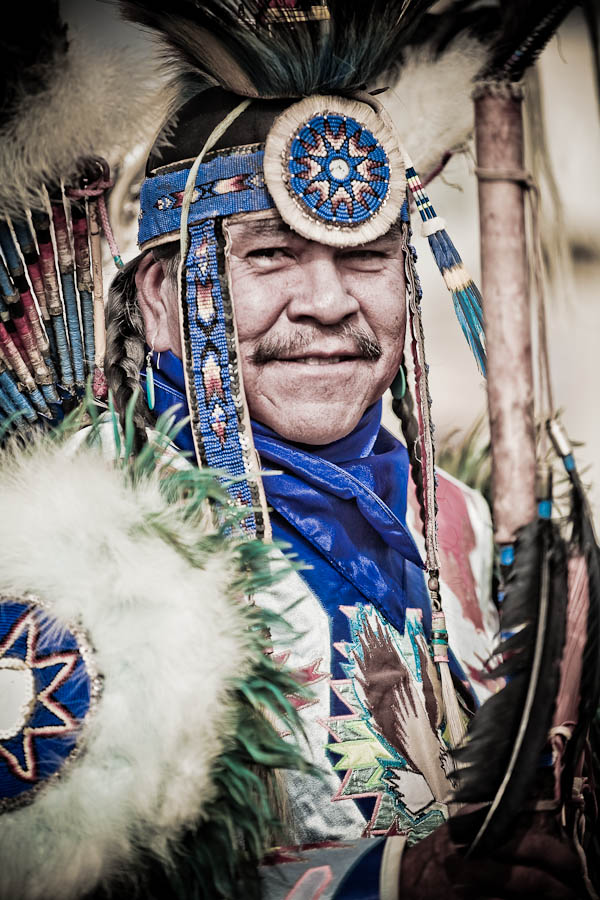 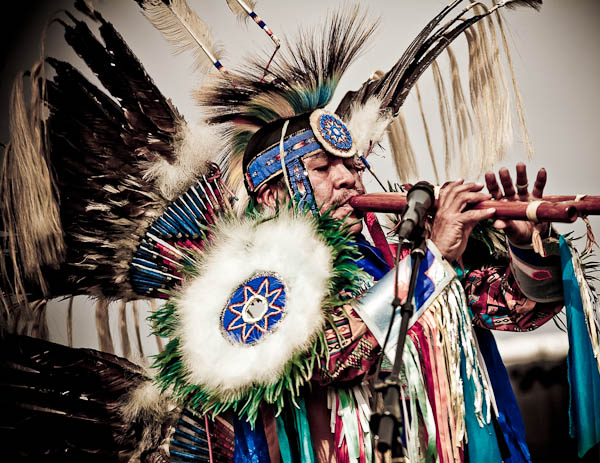 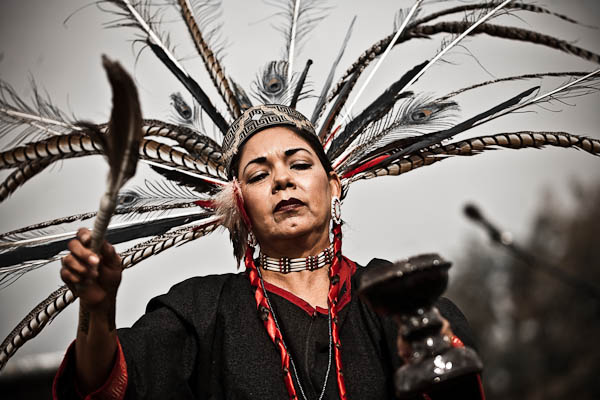 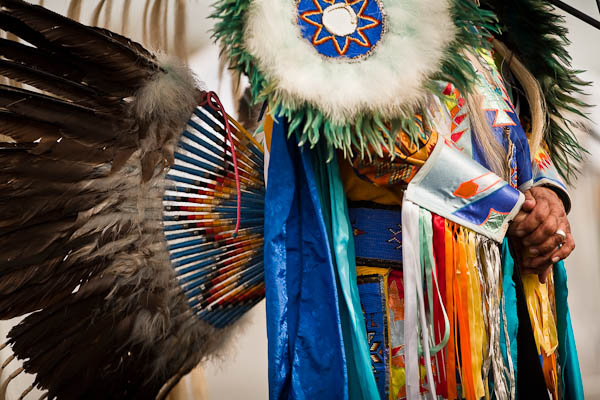 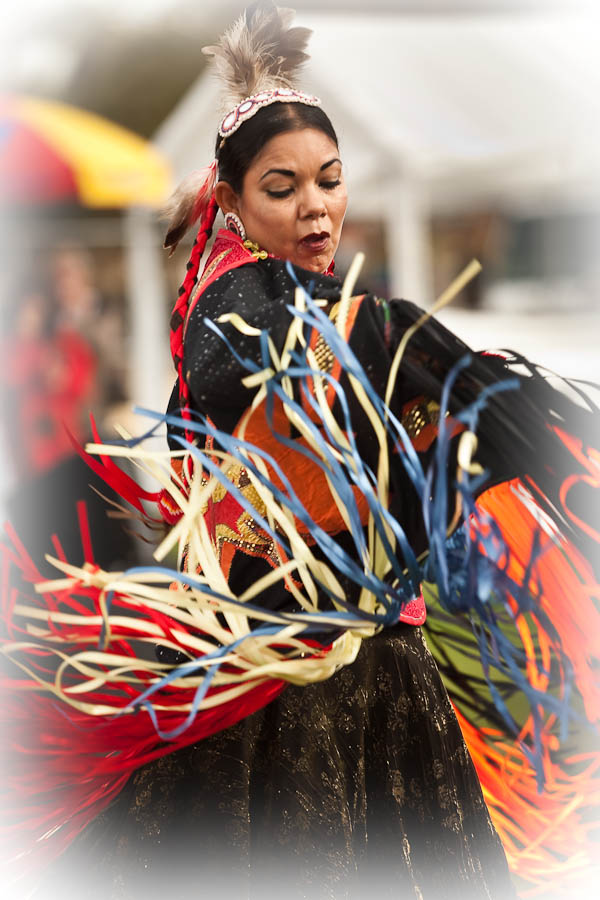 One thing that seems apparent to me is this is VERY much a family affair event.   Most of the acts on the stage, and the artists, were not alone but families working together.  Father and sons, husband and wife teams, and more.  I like that part of the culture very much and think many of us have forgotten family, togetherness and community.   Maybe that’s what I seek at native events – a sense of community.   It was certainly prominent at this event.

Another thing I notice is that many of these people are multi-talented.  They dance and sing, or play an instrument, or create some sort of art or jewelry.  Tony and Violet Duncan are one of these.  Tony has won the world championship hoop dancing title 4 times.  I talked to them later and Violet is from Northern Alberta, but they live in Mesa now. They have a gorgeous baby girl whom Violet carried on her back in a papoose like wooden board, all strapped in tight.  She didn’t seem to mind a bit and was quite content in it.  Looked heavy though.  Here’s some photos of this family.   Tony Duncan is also the flute player for the group Estun-Bah, who have played for the First Lady Barbara Bush. 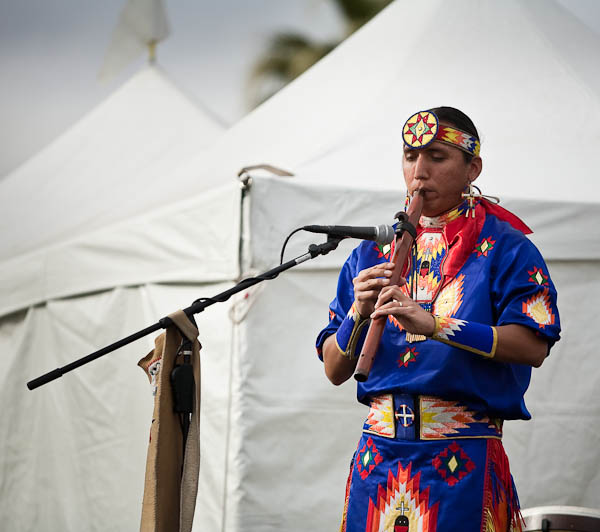 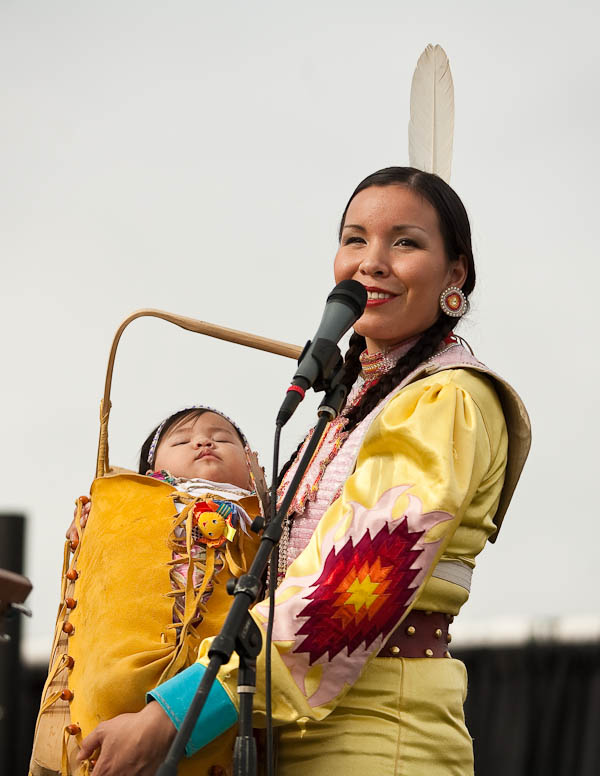 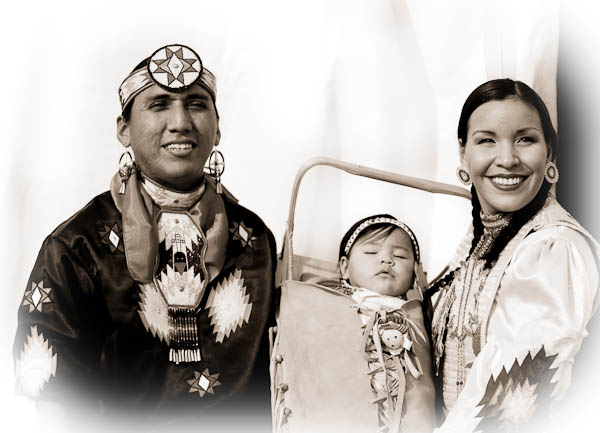 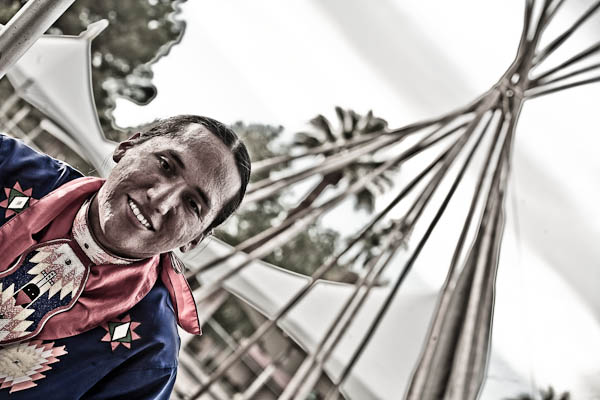 Last thing I purchased – I had to restrain myself or go completely broke here – was a WonderBracelet.  I’ve seen and heard about copper bracelets and magnetic this and that being good for healing what ails you.  This one was advertised as all that, but his signs caught my eye.  They said “ask me why the Wonder Bracelet is better than these” and he had a pile of the drugstore copper type in a heap.  So I asked him and he said his are 97-100% pure copper and sterling, those are about 25-30% copper.  The silver added is an ancient way of making the healing bracelets, done by his great grandfather, a medicine man.  This is quoted right from their website:

Native Americans believe that copper was introduced to them by the Spirit World of Medicine through songs, fibers, herbs and ceremonies. It was used to treat many human illnesses before the advent of modern medicine. The makers of the Wonder Bracelet™ understand the theory and uses of copper and sterling silver. Only they know the right (and wrong) ways to combine these metals to conjure the greatest healing powers. It is common knowledge that copper helps arthritis but the American Indian Medicine Men know that, if used properly, it can do so much more.

I asked about how it would work for allergies and then thought about my fingers.  He pointed to his dad who showed me his arm with a 9-11″ scar on it.  He’s a rodeo rider and broke it in many places.  He was told he’d never be able to close his fist again.  He wore the bracelet for 45 days and now has full mobility again.  That sold me – I’ll give it a go!  It’s quite pretty too.  I opted for the thin $40, even though the $110 one was gorgeous with bears and symbols on it, I think I’ll notice the thinner one less.  I’m not really a bracelet person.  I love their name too – Skyking!

Last up on stage was Moontee and his sons Scott and Sampson.  They did drumming and hoop dancing.  Yet another family act. 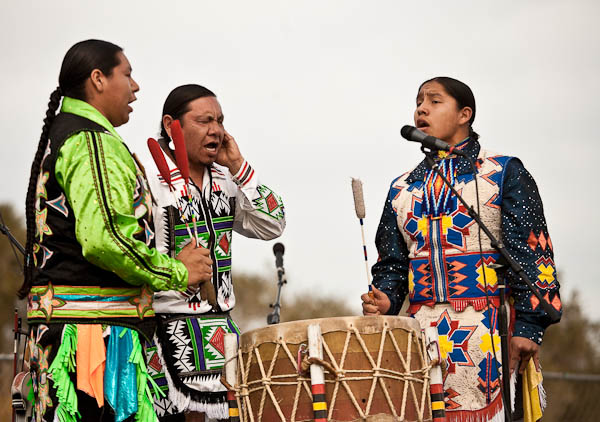 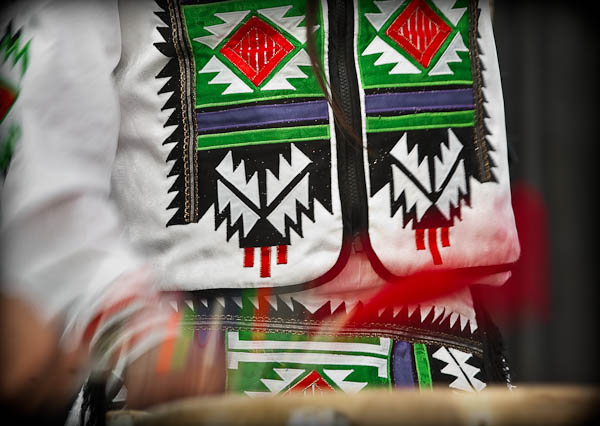 All in all, it was a great afternoon and it left me wishing I’d not only gone earlier, but the day before as well.   I came home and told Rob I wanted to follow the Pow Wow’s around next year and photograph the native dancers and performers.  Native hoop dancing is an amazing feat and both Rob and I love to see them perform.  How cool would it be to actually follow them around all year?!  I’ve actually always wanted to do that, from the first time I saw native village at the Stampede in Calgary as a child.

Stopped in at a Chipotle restaurant for THE most amazing burrito for $7!  We heard about Chipotle and there was one on the way home so I stopped in.  Had to take one home for Rob too.  Awesome food!